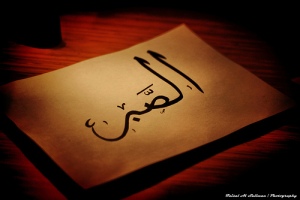 Some people cannot have patience without struggling and facing many difficulties. Others are able to have patience easily. The first type is like a man who wrestles with a strong man and cannot beat him without the utmost effort. The second type is like a man who wrestles with a weak man and beats him easily. Such is the war between the soldiers of ar-Rahman and the soldiers of Shaytan. Whoever defeats the soldiers of Shaytan can defeat Shaytan himself. ‘Abdullah ibn Mas’ud narrated: “A man wrestled with one of the jinn and beat him, then asked, ‘Why are you so weak and small?’ The jinn answered, ‘I am very big and strong compared to the rest of the jinn.’” Someone asked ‘Abdullah ibn Mas’ud, “Was that man ‘Umar? and he replied, “Who else could it have been?”

Some of the Sahabah said: “A believer whips the Shaytan the way a person whips his camel when he is traveling.”

So whoever develops, the habit of patience is feared by his enemies, and whoever finds patience difficult is in danger, as his enemy will readily dare to attack him and do him harm.

Taken from the book called Patience and Gratitude by Ibn Qayyim al-Jawziyyah pg. 15 & 16

One thought on ““Why are you so weak and small?””